Okay this is a little unexpected, isn’t it?

Since I got placed in a project group that deals with a spooky house game, I think I may write on that instead of user interviews. There are always next week to cover that topic.

Compared to the last few entries, this one would read more like a note, this is normal since I’m basically writing what I think first-hand.

Now, the concept of spooky house game is very vague. In a sense, the “Resident Evil” series of games, especially the first game, is a spooky house game, only instead of ghosts, the enemies are zombies. Then we have “Corpse Party”, a recent unique spin on Survival Horror by introducing some of the elements from adventure games. where players need to make selections and actually decide on what to investigate which alters the story and coming events.

As I’m looking at the requirements and doing the design, I noticed something very interesting. We’re using Google Tango, a device that allows for motion tracking and depth perception. So naturally, we want to make maximum use of those unique functions.

The inclusion of those functions can be used to properly simulate navigating inside a complex house with rooms, stairs and corridors. I admit the mansion in Resident Evil 1 crossed my mind for an instant when I realized this, then I reached the conclusion that a mansion as large as that one is not the best choice since that would greatly out of scope and is entirely impossible to do.

So what I do instead, is to use a software that centered on home creation to draft the mansion we’ll use. It can be treated as a certain way of prototyping since this only conveys the design of the house (the real house in the game would of course be a lot dimmer, a lot more evil and actually with ghosts) 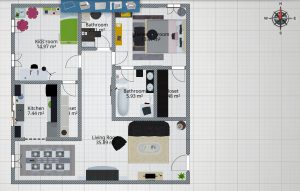 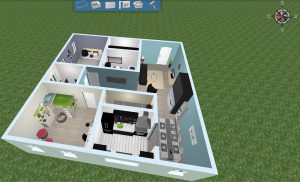 The Prototype Apartment drafted in the software. Showing what room goes where, structure of the rooms, etc.

Of course, everything would change in the later prototypes.

With the concept out of the way, the rest is to decide how the narrative should go. I initially thought of a 2 player narrative where 2 main characters need to navigate the house from different locations with different goals. However since we only have 1 Tango unit available, that idea has to be discarded. So instead, I came up with the different types of ghosts we need to interact with (together with naming them):

The core game mechanic would be to capture those ghosts with camera or some other tool, while navigating the house and not being captured by the ghosts, simple enough.

A simple mechanic leaves less room for error and makes sure that there are less to none room for player confusion.

Of course, everything still has a possibility to change based on the functionality of the Tango unit, the time and resources we have, and other factors. We’re still at the point where changing stuff won’t hurt much towards the developing of the project, so personally I’m not against any changes, and I’m always ready to fix and shuffle up the initial designs if it helps.

Hmm, maybe not the “Jumpscare-Game Over” mechanic, that mechanic has been done to death and won’t be effective if it always happens.

That concludes today’s project blog. Next week we’ll come back to user interviews.